Transferability of Discreet Log Contracts (DLCs) is of major interest due to the capital inefficiency inherent to contracts which do not rely on custody or counter-party trust. In other words, DLCs require all parties to lock up the maximum collateral that they could lose. This means that if a party wishes to exit their exposure to the DLC outcome, they must either further collateralize themselves by locking up more funds or they can attempt to transfer out of their position by finding themselves a replacement hence unlocking collateral. We have previously discussed how to execute on-chain transfers and transfers of PTLC-based routed DLCs using barrier escrows. In this post we describe a mechanism to transfer in-channel DLC outputs to adjacent channels using HTLCs. Note that the scheme detailed in this post can be used more generally to transfer any generic two-party contract output to an adjacent channel.

In this blog post, we are not committed to any specific Lightning channel architecture. In fact, the two channels involved could feature different architectures and still complete a transfer between them. It is worth noting that no change is needed to Bitcoin code in order to support in-channel DLCs and their transfers, though considerable Lightning node work is required. To help make things a bit more concrete for readers unfamiliar with embedding DLC outputs in Lightning channels, I recommend reading this previous post which has a section devoted to such channels as well as this paper for an alternative architecture that yields more practical results (but requires more changes to Lightning nodes).

We describe a Lightning DLC transfer where Alice and Bob have a channel containing a DLC output which Bob wishes to transfer to Carol. This scheme requires that Alice and Carol must already have an open channel (perhaps Alice is a market maker) with sufficient unused capacity on both sides to fund the DLC output that will be transferred to that channel. We assume that Bob wishes to exit the DLC and Carol wishes to enter in his place and is willing to lock up the necessary funds for a small time period to facilitate a transfer.

Once Alice, Bob, and Carol have agreed to and initiated the transfer, it is executed in three stages: Transaction Construction, Signing, and Execution. At a high level, both channels add transfer outputs which enforce hash time lock contracts (HTLCs) where the hash locks enforce a DLC on one channel and a refund on the other, while the time locks enforce the inverse outcomes as is illustrated in the following diagram provided by Ichiro Kuwahara: 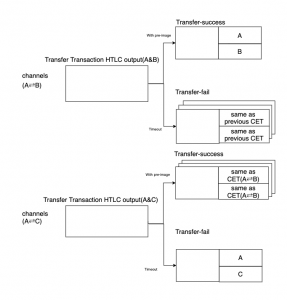 Note that this diagram is not the full picture, as it doesn’t have penalty outputs, this is just a high-level conceptual diagram. To get the complete picture as detailed below, one of the Transfer Failure Transactions (depending on which of Bob or Carol generated the hash) must have a Transfer Penalty Transaction spending the output to HTLC outputs where either one party in the channel gets all funds or the other party does. In the case that Carol is the hash generator then this HTLC output can be put in place of Carol’s output on the Transfer Failure Transaction rather than introducing a new transaction. The purpose of this penalty mechanism is to ensure that either both transfers reach success transactions or both reach failure transactions.

The following order for the signing of Transfer Transactions will always be safe (regardless of hash generator):

The transfer can timeout if the party that generated the hash goes offline or is for some other reason silent for too long. In this case transfer failure becomes the state in both channels  either through cooperative update or on-chain execution. The result is things go back to how they were before with a DLC output on Alice and Bob’s channel and no such output on Alice and Carol’s channel.

The following is what happens if Bob and Carol collude and attempt to cheat Alice:

There is one weird possible execution path which Alice can choose to pursue but has full control to avoid:

This is the only non-penalized execution path where one channel reaches the Transfer Success state while the other channel reaches Transfer Failure. In the case that Bob generated the hash, this case corresponds to Alice allowing Bob to refund his DLC in their channel while not pursuing a new DLC with Carol, allowing that transfer to refund. In the case that Carol generated the hash, this case corresponds to Alice opening a new DLC between her and Carol, while refusing to close her DLC with Bob so that she now has a DLC in both channels.

This is weird behavior as Alice would be better off communicating directly with Bob that she agrees to refund his DLC, or else directly with Carol to open a new DLC that has nothing to do with a transfer. Nevertheless, it is safe behavior as neither Bob nor Carol can distinguish this case from a normal Success or Failure which they are okay with. Furthermore Alice need not worry about being forced into this execution as she can simply choose the Happy Path Execution instead in the second step. Lastly, it should be noted that this is not a reliable mechanism for Alice to try and trick one of her counter-parties as this plan falls apart and turns into the Happy Path Execution should the hash generator communicate the hash pre-image to Alice’s other counter-party directly after executing a Transfer Success in their channel.

Adding a Premium Between Bob and Carol

In this section we present an adjustment to the above transfer scheme which results in an equally good transfer scheme where the transfer is made atomic with a payment between Bob and Carol corresponding to a premium to compensate for the appreciation/depreciation of the DLC position being transferred. The adjustment is as follows:

Note that under this adjustment, the Weird Execution results in Alice paying the hash generator in place of her other counter-party, and all parties are still happy!

Now that the scheme is fully specified and we’ve discussed various execution paths and named them, let us analyze all possible executions and argue that they are “safe”. Safety is defined here as any execution where no party has been unilaterally forced into a position they are unhappy with under the assumption that Bob wishes to exit the DLC and Carol wishes to enter in his place and is willing to lock up the necessary funds for a small time period to facilitate the transfer. Note that transfer failure is acceptable to both Bob and Carol, but a mix of one failure and one success might be unacceptable to Alice.

All of the above possible executions are safe except for the Penalty Execution because:

Lastly, note that the Penalty Execution cannot happen unless the hash-generating party reveals the hash pre-image directly to Alice’s other counterparty. They have nothing to gain by doing so. Therefore this scheme remains safe as no rational actor would do such a collusion.

In this post we have described in detail a mechanism for transferring in-channel Lightning DLCs between adjacent channels and argued that it is safe. Furthermore, we claim that this mechanism can be adjusted to allow for the transfer of arbitrary outputs between adjacent general channels. These transfers can even be linked together to create routed transfers, however we do note that for DLC outputs this routing of transfers does not make sense as there is no situation where one would want to move a DLC funding output from one channel to another channel more than a hop away such that neither party of the original DLC is involved in the resulting DLC. And thus, we now know how to execute DLC transfers in all settings where DLCs are known to be possible.

Get in touch with us Suredbits

Get in touch with Nadav Kohen